Why is it that a nation that claims to be the defender of the Christian morality amid the rotting Europe is not capable of finding in its heart a shred of compassion for those in need? The latest poll shows that the more often Poles go to church, the less likely they are to accept refugees. Where have all the good Samaritans gone in the country on the bank of the Vistula river? It’s easier to find atheists among CEOs than among ordinary Joes.

Recently, the media cried over a National Geographici video of a starving polar bear. This proves, yet again, that when the detrimental effects of human activities on environment become much clearer when we attach a heartbreaking image to them.

Meanwhile, the same fate that has befallen the starving polar bear awaits thousands of people. Climate change means for many regions problems with producing enough food, along with wars and civil wars.

The conflict in Syria, which resulted in deaths of hundreds of thousands of people, was at last partially brought about by climate change. And the conflicts of this kind will be much more frequent in the future. Not to mention millions of people who had to flee their homes, leaving everything behind, to fight for heir well-being elsewhere.

It’s really sad that the photos of refugees do not have the same effect in Poland as do those of a starving polar bear. What’s even worse, refugees and their problems are more likely to evoke negative emotions. How is this possible that we’re able to successfully divide our empathy in such a way that we humanize animals and dehumanize people who suffer at the same time?

Partially, it is undoubtedly the media and the social media that are to blame for this state of affairs. Refugees are pouring into our countries, they want to steal our jobs and destroy our culture, we hear. Each and every instance of misconduct of a refugge is sure to be featured in the media, and as a result, contribute to the overall impression of an invasion of foreigners in Europe.

Of course, not many will realize that this is exactly the same narrative that is being cultivated by xenophobic media in, let’s say, the UK. Why, Poles are to Brits what refugees to us? That’s impossible!

Yet, not many people wonder why people have suddenly started to migrate to Europe on an unprecedented scale and whether, to some extent, may this be our fault as well. It’s much easier to subsribe to a convenient narrative: that they are the enemy. After all, such a narrative is nothing new. Foreigners endangering our living space with their culture is a theme as old as the hills.

Yet, it might seem that after all the historical experiences we’ve accummulated, we would have had learned something. That our traditional values (like hospitality), which are constantly being referred to by the Polish politicians, could be shown in full in this particular situation. 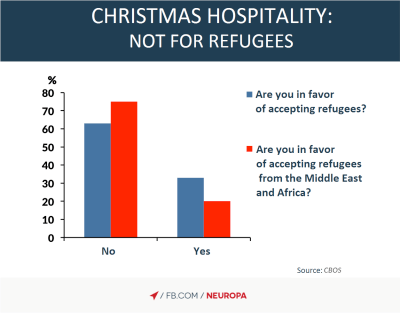 Unfortunately, history in Poland becoms useful only when we must demonstrate what great harm had befallen us in the past. When history shows that it would be actually a good idea to help other – we ignore the logic and give way to the worst possible narrative there is.

63% of Poles are against accepting refugees in Poland. In the case of refugees from the Middle East and Africa – thus the regions that in the near future will be the most exposed to climate change – against are 75%ii.

Poles are currently celebrating Christmas. A holiday dedicated to a small refugee. Yet, nobody will probably mind getting indigestion from all the food they consume while at the same time thousands of other small refugees cannot count on our assistance. Do you see the irony?

The article was originally published in Polish at: https://liberte.pl/web/app/uploads/old_data/polska-goscinnosc/

Tranlation and editing by the editors